Understanding the Culture War: Remembering a Notable Film Actress of the 1950s

Those who follow the MY CORNER columns and some of my other occasional pieces will know that I like to write not just about political or social questions, but from time to time I also venture into film and music criticism. Arguably a defense of our civilization’s broader cultural heritage must necessarily involve and incorporate the arts, and essentially music, architecture, film, painting, the whole gamut of what our civilization has created and produced over the past two millennia. If we fail to do this—if we neglect a defense of these vital and defining expressions of our culture—we fight the culture war, the battles we are in (whether we wish it or not), with one hand behind our backs, with a crippling handicap which conducts us inevitably to defeat. For our enemies understand fully and have comprehended for more than a century, that to subvert and destroy Western Christian civilization the most effective means are through our educational system and through our experienced cultural environment. It is in those areas where the Progressivist forces have had the most dramatic and lasting effect.

Change what students learn and how they learn—manipulate and alter our cultural expressions, how we sing, how we entertain ourselves, what we watch, what we read, how and what we build—and the very base of the culture, of our civilization and what we value in it, are changed and altered.

Far too many so-called “conservatives” do not understand this axiomatic truth, or if they do, then they have, as it were, “gone over to the Dark Side.”  I don’t have to cite examples, they are far too numerous. There are distinct parallels with the humiliating and disgraceful conservative routs politically and socially, whether on issues like abortion and same sex marriage, or “conservative” acceptance of the advancing political radicalism of the “civil rights movement.”

Too often modern day “conservatives” end up following the remarkable illustration and imagery that Southern writer Robert Lewis Dabney evoked 130 years ago. In debating the issue of women’s suffrage, he accused many Northern conservatives of cowardice and deserting the battlefield of ideas, eventually ending up only opposing suffrage for donkeys. That pusillanimous attitude and praxis continues, and has grown large and dominant, whether spewed forth by newscasters on Fox or in the pages of National Review, or out of the mouths of politicos like Senators Ben Sasse or Mitt Romney.

The deadliest effects of this infection and contagious venom are in how we express ourselves through the arts and entertainment. Without substantial push-back and an effective defense, the battle—the cultural war—is lost, totally lost, and the effects politically are profound. If you come to accept the same essential “cultural values” and outlook as your opponent, there is simply no real way you can eventually overcome him politically. The political “battles” become merely shadow boxing, a farcical kabuki dance between tweedle-dee and tweedle-dum (to steal from Lewis Carroll’s Through the Looking Glass).

I think it was the film director John Ford who once said that the American Western is the only original movie genre that we continentals have actually created, a native reflection of American tradition. Growing up in the 1950s and 1960s, the Western movie and later TV Westerns were a staple for me (and probably for many of you). And I have maintained in some previous essays that as a film genre, a type, the Western was basically a conservative form culturally. That is, its subject topics—settling and opening up half a continent, defeating Indian hostiles, dealing with bandits and correcting disorder (to establish an essentially stable, even conservative society), and honoring distinctive individuals, heroes—some who were deeply flawed, but heroes nonetheless—were a profound mirror of how we Americans saw our history and how we understood it. In that sense, Westerns evoked not only the creation of a usable American mythology, but heralded our ideals and deepest beliefs.

And that understanding, formed largely in the themes of older Westerns, affirmed our integral participation in and belonging to the continuum of Western and Christian civilization. Whether in the works of John Ford (e.g., his cavalry trilogy or in Wagonmaster), or a Howard Hawks (e.g., Red River), or later with Sam Peckinpah’s elegiac tribute to both the old West and to its makers (i.e., Ride the High Country), this supremely cultural message comes through. And it is a message that Hollywood openly now rejects, as it does not further the progressivist template and its radical agenda.

Today I offer a short item I authored for a Web journal, FiftiesWesterns, memorializing the actress Marie Windsor who back in the 1950s, even into the 1960s and ‘70s, was a recognizable staple not only for some remarkable Hollywood film noir productions (e.g., The Narrow Margin, The Killing, City That Never Sleeps), but known also for her work in Westerns and in television.  She’s probably not that well known today, except in the scribblings of film critics or maybe on the TCM channel, or among Western aficionados (like me) who recall her starring roles opposition such giants of the genre like Randolph Scott, George Montgomery, Joel McCrea, and James Garner.

December 11, 2020, would have been her 101st birthday. So this little appreciation uses that anniversary to celebrate one of her films, as well as to herald a small segment of our film—our cultural—history and heritage. 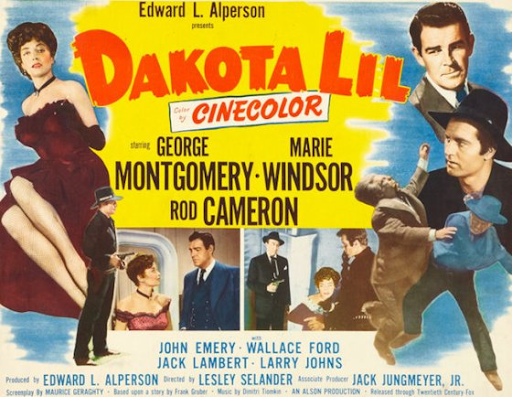 This is an entry in The Marie Windsor Blogathon, a celebration of the actress’s life and work. It comes from guest blogger Boyd Cathey.

Marie Windsor always evokes wonderful memories for me, and on this day, December 11, 2020, which would have been her 101st birthday, I think back to the films with her that left an imprint on me, and that since my childhood I’ve managed to see and in many cases finally acquire.

When I was young boy my dad and I would go from time to time to a movie house in downtown Raleigh, North Carolina, usually on a Saturday, to see a Western double feature. Our favorite was Randolph Scott. My dad’s family is from Charlotte, and my grandparents were acquaintances with Randy Scott’s family, also in Charlotte, so we had a connection. One of the first films I recall featuring Marie Windsor was The Bounty Hunter (1954). I think it was a re-release at one of the lesser, second-run theaters that used to exist in the city, as the original release was in 1954, and I was too young to go to movies back then. I remember her role as the wife of a notorious bandit—she wasn’t the main star, but she seemed to give an extra spark to this Scott Western, which like most of his Warner oaters seemed less polished than the Columbia products. 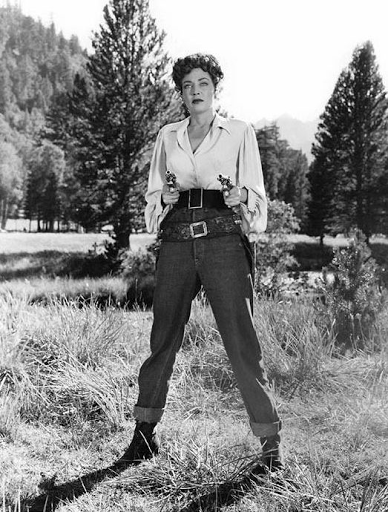 Anyway, I was taken by her. Okay, I was maybe only about 10, but I was captivated—she was beautiful and perky, and along with Sophia Loren, she became my idolized female star. In the late 1950s until her retirement in 1991, she also frequently acted in television. She made appearances in Maverick, Rawhide, Perry Mason, even Murder, She Wrote with Angela Lansbury, one of the best American crime mystery series. And Windsor was always beautiful and captivating, she never seemed to age.

A few years later—probably the early 1960s or so—a local television station broadcast Dakota Lil (1950), one of those films that stations would broadcast usually late at night. I begged my parents to let me stay up—it was a school night, and my normal bedtime was 10 p.m. Somehow they agreed, maybe because dad wanted to see it also. Anyway, we both viewed it, and immediately Dakota Lil became a favorite. 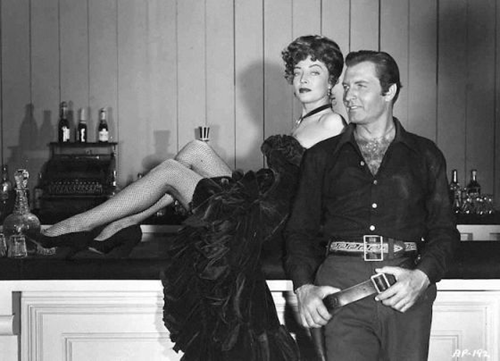 The plot is fairly simple, although the development is more complicated. George Montgomery, Secret Service undercover agent Tom Horn (as Steve Garrett), is charged with breaking a major counterfeit outfit, the “Hole-in-the-Wall” gang in Wyoming. To do this he travels to Matamoros, Mexico, to enlist the aid of Windsor—Dakota Lil—noted for her ability to perfect an exact replication of official signatures. They both head to Wyoming, but she initially begins working with the chief culprit and the particularly nasty Rod Cameron (Harve Logan/Kid Curry)

The first thing you notice is the film score: it’s by the award-winning composer Dmitri Tiomkin, and it is gorgeous and memorable. In fact, its themes remained in my mind long after I first watched the DVD. Certainly, Fox by charging Tiomkin with the music of Dakota Lil intended it to be more than just another “super-B” Western.  Additionally, John Emery, who plays the role of Vincent, a former concert pianist and hanger-on to Windsor, offers up several short pieces by Frederic Chopin! Marie—Dakota Lil—sings various songs, with the singing voice of Anita Ellis. She executes excellent lip-syncing.

Although Dakota Lil showcases a youngish George Montgomery, Windsor steals the show and adds essential sparkle to the film. She invests the generally unremarkable dialogue with some real panache, indeed with just a face gesture or an inflection in her voice she can steal a scene. When she shows up at the Wind River, Wyoming, saloon (owned by Cameron) and comes upon the current diva, that chanteuse asks her: “What are you staring at?,” Windsor responds dryly: “A no talent performance.” Likewise, her dialogue with Cameron on how they plan to split the proceeds of the counterfeit government bonds shows comparable spunk and her mastery of crisp exchange, even humor. One can see how Marie Windsor fit so well into film noir, indeed, Dakota Lil shares certain characteristics of that genre. Consider, for example, Cameron’s preferred method of killing his enemies—by brutal strangling, almost matter-of-fact in its cruelty.

It was only in 2015 that I discovered that a DVD existed, in fact, two DVD releases. And I snatched up a copy as soon as I could. Both are in the PAL European video format, which means they will not play in American NTSC DVD players; but All Region DVD players are easily available and can be had inexpensively via Amazon.com and elsewhere. One copy was issued in Spain, which I have not seen. My copy is issued by Simply Media, a British company, which licensed their copy from Renown Films.

Although Dakota Lil was originally released by 20th Century-Fox in Cinecolor (February 1950), to my knowledge no color issue has emerged since its original release. Neither of the available DVDs is in color. Since Cinecolor was a less stable and reliable color process than Technicolor, one wonders if such a copy still exists somewhere in the Fox archives. Kino Lorber has done some wonderful restoration work with Scott’s The Cariboo Trail and Canadian Pacific, both Fox releases, so maybe we are allowed to hope?

Both the Simply Media copy and the Spanish release are available reasonably from the American firm, DaaVeeDee.com and also from Amazon.com. My copy is a good B & W issue, with a sharp picture and no sign of deterioration.

Directed by warhorse director Lesley Selander, Dakota Lil is surely one of his finer efforts. It deserves to be much better known. No, it’s not perhaps as good a vehicle for Windsor as, say, Hellfire (1949, with Wild Bill Elliott), but it merits attention…and perhaps a full digital restoration?

In any event, it should be seen for Marie Windsor’s fine performance which raises this film above the dozens similar to it released in 1950. Happy Birthday, Marie, and may your legacy on film continue to be enjoyed and appreciated!