Every now and then I pass on a column written by someone I respect and whose perspective I value—an article or essay that I believe adds to and brings out points that I have tried to make, and that the writer sharply highlights and focusses with even more clarity and detail.

In the past I’ve featured pieces by Pat Buchanan, Ilana Mercer, Jack Kerwick, Clyde Wilson, Paul Gottfried, Brion McClanahan, and others. In our decaying American society, with its traditional culture under severe attack and disappearing before our eyes, these writers have significant contributions to make…and should be widely read and their views digested.

One author whom I count as a dear friend is “The Dissident Mama.” Her columns are like sleek rapier jabs at the seemingly all-powerful managerial state now ensconced in Washington. Profoundly grounded in her native Southern soil she is an intrepid defender of Southern heritage. But almost alone among those columnists and writers defending the South these days, she understands the larger context—how the American South historically as an expression and outpost of Christian civilization also fits into the immense global conflict between the retreating and beleaguered forces of that tradition and inheritance, and the “new barbarians” who relentlessly seek its—and our—destruction and elimination.

“The Dissident Mama” has also been a fearless commentator on and observer of the religious transformation taking place in Russia since the fall of Communism in August 1991, and the fascinating and ironic contrast between that evolution and what has been happening to the American nation. Like her I have in the past commented on the rebirth of traditional Christianity in Russia during the past three decades. Indeed, the world has been turned upside down, with Russia now defending Christianity, while the American and Western political and media elites viciously attack it. As Patrick Buchanan now rightly asks: “On whose side is God NOW on?”

Back in 2019 “The Dissident Mama” honored me by reviewing my little book on Southern heritage, The Land We Love, in one of her columns. Her understanding of what I was attempting to do and achieve was remarkable.

Now, in the pages of Russian Faith online journal she returns to the similarities and contrasts between the traditional South and post-Communist Russia, and once more employs The Land We Love as a benchmark. With appreciation I pass that essay on today.

Dixie & Russia: What Do They Have in Common? 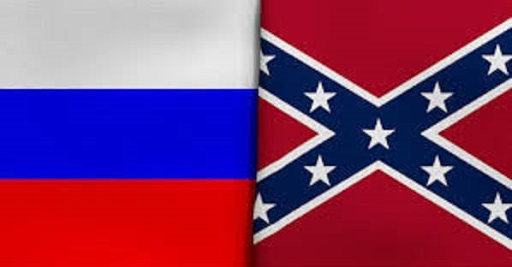 Both Russia and the South are hated by the oligarchs in D.C., NATO, the EU, and the UN, they are condemned by Wall Street and the Pentagon, and they are ceaselessly mocked and ridiculed by self-loathing Westerners. Why?

Dixie, like Russia, is an enclave of civilization itself. Both cling to the bedrocks of faith and family, in spite of government-coerced progress. But Dixie is quickly losing its grip, whereas Russians are holding on tight. What’s the difference? . . .

I began reading “The Land We Love” on the long flight back to the U.S. from Helsinki.

My family and I had been on a three-week vacation in Russia, and our experiences gave me such a keen insight into the dramatic history and resilience of the Russian people, especially among the rekindled and growing Orthodox faithful.

As I turned the pages in Dr. Boyd D. Cathey’s book, I was overwhelmed by the similarities of the Russian and Eastern bloc peoples who suffered under the foreign influence of Bolshevism, and that of Southerners tormented by the nonindigenous ideology of central authoritarianism.

Two agrarian societies remade industrial through blood and fire. I was awash with the knowledge “that you can’t extinguish truth if good men and women stand boldly for it,” as Cathey says.

We in Dixie have experienced hardship and destruction, perhaps not on par with Soviet Communism’s tens of millions killed, but a deadly religiosity nonetheless. And one that is born of the same rotten fruit. Godlessness. Egalitarianism. Collectivism. Coercion. Consumerism. Covetousness. “Progress.” Under these totalitarian edicts, conformity by force is called “unity,” while “shared community and kinship,” as Cathey describes localized loyalties, are seen as “treason.”

I was also struck by the modern parallels. Both Russia and the South are absolutely hated by the oligarchs in D.C., NATO, the EU, and the UN; they’re condemned by Wall Street and the Pentagon; they’re targeted for propaganda campaigns by the corporate media, Hollywood, K-12, and academia; and they’re ceaselessly mocked and ridiculed by uninformed and/or subversive urbanites, elitists, wards of the political class, and self-loathing Westerners. Why?

Because all right-thinking people know that Dixie and its white supremacists need(ed) to be conquered, colonized, and remade, just as Russia and its backwards nationalists must be reformed by any means necessary. Robert E. Lee was a traitorous slave-owner and Vladimir Putin is a thug who was in the KGB, so bombs away!

It’s what’s known in geopolitical terms as “humanitarian warfare.” The globalists will save the planet (or “the Union,” as was the propaganda of the 1860s) and offer salvation to the Christofascists from Montgomery to Moscow. They are “the antithesis to their Leftist nostrums” after all. This is precisely why Cathey proudly displays a “Putin For President” bumper sticker on his car.

This bogeymen narrative serves two purposes: to crush traditionalist opposition to the PC status quo and to set up the scapegoats who, with all their backwards notions of faith, family, and roots, are just standing in the way of enlightenment and evolution. The road to establishing the new-world order is paved with bricks of the archetype, upon whom the revolutionary masses trample on their sprint straight to hell.

Lulled into complacency by the false gods of consumerism and creature comforts, the South’s heritage and identity are on the decline, while Russia’s are on the march. Therefore, to ensure globalist domination, the oligarchs must finally extinguish the South’s flickering fire while trying everything within their deep-state power to stamp out Russia’s newly lit flame.

Just check out the stark contrast of Putin’s New Year’s address, framed by images of the many stunning Orthodox churches which fill Red Square and the Kremlin, with that of globohomo deep-stater Anderson Cooper, talking smut while flanked by Times Square’s oppressive Yankee commercialism and event attendees even wearing ad-sponsored hats. It seems so strange that the former outpost of Stalin is more beautiful than is America’s supposed premiere city, the Big Apple, but it’s obvious to me which one is rotten to the core.

“Our Southern society is an outpost of Western Christian civilization,” Cathey wrote, but I would argue, that Dixie (like Russia) is an enclave of civilization itself. Both cling to the bedrocks of faith and family, in spite of government-coerced progress. But we are quickly losing our grip, whereas Russians are holding on tight. What’s the difference?

After 155 years of nonstop Reconstruction, the South is a “Christ–haunted society,” as Flannery O’Connor once noted. All that Yankee re-education has taken a toll; yet, “Southerners were – and still are – self-consciously ‘traditionalists,'” explains Cathey.

“In both slavery and post-slavery times, it was not so much race, but rather a desire to preserve the social order – hierarchy and balance in society – which motivated most thinking Southerners.” Such a worldview is like kryptonite to the perpetual meddlers of puritanical-progressivism.

When Puritan descendants “began to veer into Unitarianism, transcendentalism, and heretical millenarian cults” and eventually the “social gospel and secularist movements,” the South and its “orthodox Trinitarian and Incarnational Christianity … inhibited deviations and heterodoxy.” Southerners have always had a thick armor to repelling the wiles of invaders and reformers.

“Above all other Americans, Southerners have maintained a unique sense of community and rootedness in time and place – and in the land they love.” So, it is “Southerners’ lived traditionalism” that leftists aim to destroy. They see it as competition. As too dissident. As too rebellious “to the lunacy of an ideology that promises utopia on earth, but ends in enslaving its inhabitants.” Dixie has been and still is “most resistant to such Siren calls.”

The principles of the “Confederate Southerner … oppose not just the Leviathan and managerial ‘big government’ state that has been thrust upon us,” but they’re also defined by “how we differentiate ourselves from folks in the rest of the Federal union.” This “Southern philosophy” has always made us “Other,” even before the War of Northern Aggression, and most certainly since leftists co-opted the term for their aggrieved-minority schemes.

Our ancestors didn’t really worry about it because, honestly, most Southern folk didn’t sit around caring two hoots about what Yankees thought of them. Similarly, the average Russian doesn’t spend much time pondering the machinations of the Russophobes in the West. What should rouse the ire of traditionalists is when the globalists want us either in bondage or dead.

“The current American political system has been largely a charade, parading as a ‘democracy,’ but in reality an insatiable and ruthless oligarchic Behemoth … a caste system more severe, more self-aggrandizing, and more domineering than anything traditional aristocracies ever envisaged or dreamed of.” But as Cathey reminds us, God is the author of history, not man.

Cathey notes, “Who would have dreamed in 1916 that Vladimir Lenin, in lonely exile in Switzerland, would in one short year become dictator of the world’s largest nation? And then, who would have thought the Communist system he created would suddenly expire ignominiously in a few short months in 1991,” to quote T.S. Eliot, “not with a bang, but with a whimper.”

“I see incredible lessons – and reasons for hope – in the experience and rebirth of a Christian Russia,” Cathey told me. He is right. Our enemies are (and have always been) the same. But through their ancestral faith, the Russians have a revitalized unity and determination. Christian folkways are at the heart of their people and their 1,000-year Orthodox history (illustrated at top with the Baptism of the Rus’ in 988), and it will be the key to their future. Southerners should take note.

“We must stand for – we must dwell within – our Citadel, our inheritance and culture, our very identity and being as a people representing 2,000 years of Western Christian heritage, or we shall disappear into the abyss of history.” It’s time to cast off the yoke of nation-statism and its technocratic idols, and cherish our roots.

“Those who keep high the standard of faith and conviction … with God’s good help and His grace, they do succeed,” Cathey sums up in the final chapter of his book. And that is exactly what Southerners need to remember.

As the Apostle Matthew preached, “For what is a man profited, if he shall gain the whole world, and lose his own soul?” We must not be “Christ-haunted,” but rather “Christ-centered.” This is how we prevail.