The Film “Firetrail” and Sherman’s March Through the Carolinas:

Every Good Southerner Should See It 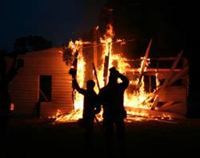 For some time now I have had a passion for classic films, in particular those films that portray sympathetically and with historical accuracy the Southland, and, more particularly, events of the War Between the States. I can remember going to the old Village Theater in Raleigh and, with my parents, seeing a re-screening of “Gone With the Wind.” And around that same time—about 1956—we also were able to view “Song of the South” before it was essentially banned by Disney—an early example of hysterical “wokeism” before being “woke” was the chic thing to be. (Note: Back on July 21, 2019, I listed in this column, later picked up by the Abbeville Institute, a Web site that offered fine, pristine DVD copies of “Song of the South,” but I warned then that the “cancel culture” totalitarians would most likely get around to purging it; as I searched for that site today, it had disappeared, been banned, just like I predicted.)

I share my passion for Southern film with my long-time friend Dr. Clyde Wilson, editor of the Papers of John C. Calhoun and the dean of Southern historians, now retired from the University of South Carolina.

Just recently (February 28) Clyde published a brief column, a movie review, at The Abbeville Institute. It was a short negative critique of the film, “The Burning of Atlanta.” Although I try to catch most movies with a Southern theme, and write about them if they interest me, I had not seem that one…and after Dr. Wilson’s commentary, I don’t plan to.

But in his review he mentioned another film that had somehow escaped my attention, despite the fact that he had written about it very favorably at least twice, back in 2014 and 2017, on the Abbeville site.

It is “Firetrail,” originally released back in 2007 and still available on DVD.  Although the original well-over two hour version (two DVDs) is still available (more on that in a moment), there is also a more recent, heavily cut issue that comes in at only 82 minutes; stay away from that heavily-butchered one, as Dr. Wilson advises.

But the original, uncut version demands attention and a recommendation, not only for those Southerners interested in the ravages that General Sherman inflicted on South Carolina and North Carolina (as opposed to the vicious anti-Confederate ahistorical ignorance of supposed movie pundits like Fox News favorite Victor Davis Hanson), but for its entirely believable story of true romance, devotion to duty, exciting derring-do, and bearing up under the intense suffering of “total war” inflicted on civilians by Sherman’s host of barbarians.

“Firetrail” takes us from the first entry of Sherman into South Carolina—and Sherman’s bummers and amoral scavengers—below Orangeburg, South Carolina, up through the burning and devastation of Columbia, then on to Fayetteville, North Carolina, and a well-mounted recreation of the Battle of Bentonville. Based on a fine historical novel by Southern novelist Lydia Hawke (aka, Lydia Filzen) who has also authored several other war-themed works, “Firetrail” was directed by Christopher Forbes. He managed to enlist various re-enactment units, create a model of Columbia set to the torch by Yankees, and perhaps most importantly, to cast some essentially non-professionals as his actors who actually make the storyline come alive.

True, they are amateurs compared to, say, a Robert Duvall or a Stephen Lang in “Gods and Generals.” And “Firetrail” lacked the millions of dollars lavished on Ron Maxwell’s grand production—don’t expect another “Gone With the Wind.” But nevertheless as I watched the entire presentation I could not help but get involved and be mesmerized: these are real people, with real stories and lives made terribly precarious by the brutalization of war. I wanted to follow them, I wanted them to make it through successfully.

Jim Hilton assumes the role of the film’s hero, the dashing Captain Blake Winberry, of the 5th South Carolina Cavalry. His bride-to-be is Judith Rogers, as played by Lin Lafitte. At the beginning we learn that Rogers is a desperate refugee from the burning of Atlanta hoping to make her way to Fayetteville where an aunt resides. Her husband has been killed, and she is essentially by herself in dangerous country. In the first scene she dramatically holds off three Yankee bummers just as Captain Winberry appears to offer his support. For him—and then for her—it's almost love at first sight.

Winberry insists that she accompany him to his family’s home in Columbia; his father is a doctor, and there she meets the rest of the cast of characters, including Blake’s zestfully delightful sister Lexi (Nicole Dye) who would like nothing better than to go out and fight Yankees, and his former sweetheart Sally Dubois (Tomme Hilton), who seems only interested in marrying for better social status (something that Blake doesn’t seem to have)—she ends up later squiring off with the notorious womanizer General Hugh Judson Kilpatrick!

The action never ceases. As the Yanks move irresistibly northward into North Carolina, Blake insists that Judith leave the war zone, and they separate only to be reunited towards the end of the film as Blake lies wounded and nearly killed by a Northern soldier.

As I stated earlier, I could not stop watching it. Despite its length—it took all of an afternoon, and I have not had the time to watch the bonus material yet—and despite the lack of Hollywood polish, this film touched me as I think it will touch any Southerner who honors his heritage and understands the sufferings and sacrifice of his ancestors.

The complete film—the two DVD set—is available and is the one to get. It is professionally and commercially done and handsomely produced and packaged, not a “private” edition in any way. It can be easily obtained from Lydia Filzen (the author of the novel uses the pen name “Lydia Hawke”—she’s also a member of the UDC), either by check or via PayPal transfer made out to Mrs. Filzen. The price is $20.00, which includes postage and shipping for the two-DVD set.

Her Web site contains many additional details: http://www.lydiahawke.us/ I urge you to investigate it. She can be reached at the following email address: lydiafilzen@comcast.net

For mailed orders with check her mailing address is:

In our age of “cancel culture” when even Dr. Seuss and familiar cartoon characters can be outright banned and essentially made non-existent for us and our children…when ruthless totalitarians, whether pitiless barbarians in the dominant culture or spineless cretin-like “conservatives” and Republicans who give in to them, prowl about like the “rough beast” St. Peter the Apostle warns us of (I Peter 5:8), “seeking whom he may devour,” then we must continue and treasure such works as “Firetrail.” It reminds us of the reality of our past, for in that memory of our past is also the seed of rebirth of our Hope for the future...and the justice of God.