Vigil of Christmas – Vigil of Hope!

In Times of Anguish and Despair 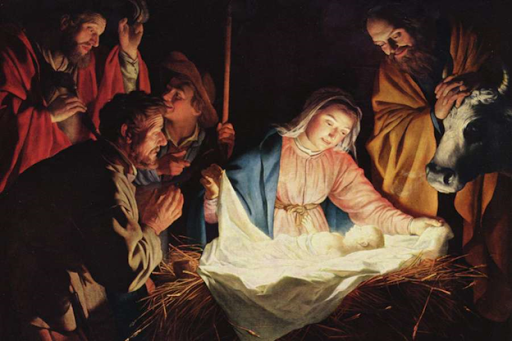 Once again I return to a Christmas essay I authored several years ago, as I think it may have even more resonance now in today’s world which is increasingly consumed by madness, apostasy, and outright rebellion against the laws of Nature and of God.

We have just experienced a rigged and stolen election, with the Powers of Darkness reasserting their control over this decaying nation. Now perhaps more so than ever we behold the awful visage of sheer Evil—in the scowls of our leaders, in many of our institutions (the media, the church, education), and, yes, in the very faces of our neighbors. Truly, it is a kind of demonic possession, not so much in the traditional theological sense, but, yes, as a type of intellectual possession full-blown, which directs thoughts, actions, indeed, language itself. This rampant Evil refuses to accept dissent. Those of us who oppose it are labeled disdainfully “deplorables” or “irredeemiables,” and worse:  we are called racists, bigots, homophobes, white supremacists, misogynists, not worthy of any consideration except for our very extinction.

As a “woke” student son of some friends lectured me several years ago: “You older conservatives will die off in a few years, and with you, your bigoted views. Then we young people will take full control of this country!” Those words were burned into my thoughts and memory, because there is some truth in them—because with our schools and colleges now captured by the progressivists, the triumph of critical race theory and woke socialism, each year thousands of newly-minted demonic automatons are spewed out like zombies. With the subservience of both political parties to managerial Deep State globalism, the future looks bleak.

At times it seems that all hope is dimmed, that a new Dark Age descends irresistibly over us, that we are helpless before its ravages and destructive power. But what I wrote back a few years ago I firmly hold to, for in fact Hope has not been exiled from the World. In these darkest moments, in the apparent despair, it continues to light our way, if we would listen and take heart.  For that reason I offer that essay this special day.

Today is the Vigil of the Nativity of Our Lord, a day filled with anticipation and scarcely concealed joy as we await the memorialization and recreation of that ineffable Event—unimaginable in human terms—that forever changed human history.

The sin of Adam—Original Sin—affected all mankind and left descendants marked, indelibly stained by that original fault.  Adam’s sin was a form of disobedience, but a disobedience so grave and monumental against God’s Creation, that only the Coming of the Messiah, the Second Person of the Trinity of the Godhead, could repair it. And the Son of God would be Incarnate in a woman who would be pure and herself immaculate, untouched by the inheritance of sinfulness (by the merits of her Son). Only such a pure womb would be fitting for the Incarnate God. And only the Incarnation into one of His creatures would serve the purpose of demonstrating that Our Blessed Saviour would come to us, not only as God, but also in the form of Man—this was fitting because it was to Mankind that He was sent.

For hundreds of years the People of Israel had awaited the coming of a Messiah to lead them, to liberate them and, if you will, to repair Adam’s Fall. But this vision—whether expressed in the revolts of the Maccabees or in later violent episodes like the revolt of Simon bar Kokhba against the Romans (132 A.D.)—implied not just satisfaction for sinful ways, but increasingly the establishment of an earthly and insular kingdom for and of the Hebrews.

And although Our Lord and Saviour indeed came first to the Jews, and offered them His reparative Grace and Salvation, it was by no means to be limited to them. Indeed, His message was universal (as it had been to Abraham). And those Hebrews who accepted the Messiah—and those gentiles who also joined them—became the Church, the “New” Israel, receptor of God’s Grace and holder of His Promises and carrier of His Light unto all the world.

While a majority of old Israel rejected Our Lord, demanding His Crucifixion before Pilate, those who followed Him and believed in Him entered the New Covenant, a New Testament. It is in this sense that the Christian church inherited the promises of Israel and the Old Testament, and fulfilled those prophesies. And that fulfillment continues.

St. Paul in his Epistle to Titus [2:11-15] summarizes both the dazzling and miraculous wonder of Our Saviour’s Grace amongst us and its inexhaustible power to transform us, as we await His final Coming in Glory: “The grace of God our Saviour hath appeared to all men, instructing us, that, denying ungodliness and worldly desires, we should live soberly and justly and godly in this world, looking for the blessed hope and coming of the glory of the great God and our Saviour Jesus Christ: Who gave Himself for us, that He might redeem us from all iniquity, and might cleanse to Himself a people acceptable, a pursuer of good works. These things speak and exhort: in Christ Jesus our Lord.”

We—the Christian church, those chosen out of Grace who accept God’s gifts—are in a journey to that final day when Our Lord will return. We have been given for that journey the armament of Our Lord’s graces in the Sacraments and through His love, our Faith, and a Hope that whenever we are tempted to despair, pulls us back and redirects our vision.

Years ago when I was doing my doctoral work in Pamplona, Spain, I had several dear friends. One of them, by name Teofilo Andueza, although he and wife lived in the city, kept his family’s ancestral home and farm up in the Pyrenees Mountains. On numerous Saturdays we would travel out there; the women would busy themselves in the kitchen to prepare roasted lamb chops, pork shoulder, “patatas fritas,” various “ensaladas mixtas,” all sorts of desserts (flan and pastries), and, of course, there would be plenty of Rioja wine and cognac. After eating—which usually continued off and on for most of the day—we would sit and smoke some “puros” (Cuban cigars—well, I didn’t worry about THAT aspect of Cuban Communism back then!).

I remember on one occasion Teofilo took me up to the crest of a nearby mountain; below we could see the city of Pamplona, as he related how in 1873 the city was occupied by “liberals” who supported the central and centralizing government in Madrid, but that elsewhere in all of Navarra, in every rural village and small hamlet, the people had risen up as one under the military banner of “God – Country – States’ Rights – and the Rightful King” (against the liberal king then installed in the nation’s capital). In July 1936 Teofilo, his father, and his elderly grandfather (who as a teen had joined the 1873 Traditionalist rising) all volunteered to fight under that same banner, the standard of the Traditionalist Carlist Communion against the secularist and socialist Spanish Republic (which is so loved by the establishment Neoconservatives these days).

Like his grandfather in 1873, Teofilo was barely 14 when he enlisted in 1936. And while his grandfather was too old to see active, front line combat in the Spanish Civil War of 1936-1939 (serving in rear-guard duty), Teofilo saw combat in some of the fiercest battles against the Red Republic and marched in the Victory parade in Madrid in 1939.

But like my other Carlist Traditionalist friends—who were termed “Intransigentes” by more moderate (and compromising) partisans on the Right—Teofilo believed that Francisco Franco had not carried through with the actual re-establishment of a Christian kingdom as promised—too many foreign influences, too many compromises, and, lastly, opening the door in 1953 to all the worst aspects of American commercialism and cultural decay. The national reawakening promised in 1939 had not taken place, its fruits dispersed, and in exchange, Spanish society had increasingly accepted the worst features of American culture and secularist thinking.

At the top of that mountain crest, as we looked down at Pamplona, Teofilo became emotional. “My grandfather fought against that liberal contagion 100 years ago,” he exclaimed. “And in 1936 three generations of my family dropped everything and went to war against the communists and socialists, to a crusade for Christ the King—that He might reign in society.” And then, he turned to me, took me firmly by the shoulder, and said: “And now, if it were just you and me—and we were on God’s side—once again we would be victorious, for even if we are only two, nothing is impossible to men if they fight on God’s side!”

I have remembered that incident constantly over the years, especially when things appear dark or despairing.  For not only did Grace and Salvation and the Healing for sin come into the world in a humble Cradle in Bethlehem a little over 2,000 years ago, but Hope came also. And it buoys us up, gives us balance and equilibrium, and acts as “Faith’s Sentry” to protect our Faith from harm and the threat of despair and apostasy.

In the year 312 A.D., facing an immense military challenge, the Emperor Constantine prayed to the Christian God, asking what he should do. As related in Eusebius’ Ecclesiastical History, he had grave doubts about the traditional Roman gods. He prayed earnestly that the Christian God would “reveal to him who he is, and stretch forth his right hand to help him.” His prayer changed the course of human history. The answer came in a vision emblazoned across the noonday sky, and upon it the inscription read: “In hoc signo vinces”—By this sign you shall be victorious. The emperor then ordered that his soldiers have the Christian cross inscribed on their shields.

Victorious at the Battle of the Milvian Bridge, Constantine then issued orders that the Christian church was to be fully free in its mission and the exercise of its functions. Although he did not make Christianity the official religion of the empire, Constantine bestowed favors on it, built places of worship for Christians, and presided over the first general church council. He became the first emperor to embrace Christianity and was baptized on his death bed. In less than 300 years the faith of Christ born in humble surroundings in remote Judaea and persecuted mercilessly and ruthlessly, nourished by the blood of martyrs, now emerged from the catacombs, triumphant, a light unto the pagans, to continue its salvific mission.

Is this not the power of Faith supported by Hope? That even if we be in the catacombs, even if we see our civilization and culture coming apart at the seams, even if we see the Church subverted and false prophets in positions of immense authority preaching false doctrines—even in these circumstances, we  hold “fortes in Fide,” firm in the faith, bolstered by Faith’s Sentry.

So, then, as we approach the Holy Day of indescribable joy, we know with assurance that the ineffable Gift from God of salvation and forgiveness is ours, and that no one can take our Faith from us, buoyed, as it is, by the unbreakable assurance of Hope—which came to us that Christmas so long ago.

“Even if it were just you and me—and we were on God’s side—once again we would be victorious, for even if we are only two, nothing is impossible to men if they fight on God’s side!”

Saving Grace entered the world two millennia ago, and with it the Hope we possess.  And there are broad smiles on our faces and joy in our hearts.